The official list of supported MCE remote controls is quite good, but unfortunately many of the recommended models are not available any more.

So I decided to create my own list of compatible, recommended USB remotes and will try to keep them updated.

Every remote below meets these requirements:

For mapping of non-default buttons, you can use the addon Keymap Editor.

Note: Mouse pointer keys are not really necessary for Kodi.

(1) Although the price is quite high, the HP MCE remote is my current favorite. It offers all needed keys including numbers, and both the remote and receiver are good quality products. In OpenELEC, it is recognized as remote, so „irw“ command and several tools are able to show keypresses and handle keys for special cases. Basically all keys are predefined and working. The receiver gets every signal, no matter where you point the remote. Key repeating (e.g. for volume adjustment) is also supported.

One single deficit: If buttons are pressed very shortly, the receiver gets them but irw or OE/Kodi does not. But it’s something to get used to easily.

Update 2018-06: The „new“ HP MCE remotes got some keys replaced, in my opinion those are better for Kodi usage. E.g. you have red/green/yellow/blue keys on top instead of Radio, Music etc. Tested with Kodi, the new keys can be programmed with the Key Editor addon, e.g. you can use the Red key for the context menu, which was not possible with the Radio key before. 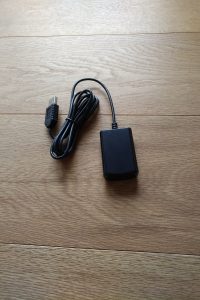 In addition, the new USB IR receiver is much smaller than the old one.

(2) Full Name (lsusb) is „1d57:ad02 Xenta SE340D PC Remote Control“. It basically works out of the box, but has some major disadvantages if you want to e.g. use it for less popular features: